Victoria Ayala is the director and founder of all the Order of Ayala centers. She personally chooses every new member that joins her team in each store and school, advised by the best professionals in the field. In addition, she always has the fortune to have teachers and professionals to come and share their ancestral knowledge and new lessons.

All team members are constantly evolving in order to acquire new knowledge every day and to be able to offer clients and students an excellent service and quality for affordable prices. 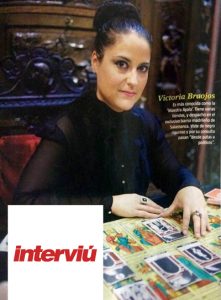 Victoria Ayala is one of the most recognized mediums and magicians worldwide. She has helped thousands of people and collaborated with people from all social classes. Hailed by many gnostic groups and having introduced a countless number of people in the world of magic, she has extensive experience preparing and instructing through lectures and courses running all year long.

At the age of 7, she was directed towards her true gift, which is mediumship, by participating in several spiritualist circles, learning and making vault altars and contacting with the world beyond. Later on she began to travel Europe and South America where she learned everything she knows about Santeria, Candomble, Voodoo, Shamanism and syncretic religions. But it was in Haiti where she could comprehend and understand how to control the very specific energies that the Bokor people work with, compiling all the knowledge about botany that she would later adapt for the use of ceremonial magic. She also traveled to the United States, Arab Emirates and Egypt, completing part of her studies with Mohandmad Al Jawad, who introduced her to Egyptian magic and Pharaonic amulets, matters on which she lectured from a very young age.

Back in Spain, she directed several esoteric and clairvoyance TV shows on Spanish channels Vía Digital and Ono, leaving them two years later to devote herself to personal assistance. She now collaborates with several TV channels nationwide on some occasions.

Nowadays she belongs to several orders dedicated to esoteric and spiritual studies in which she collaborates and teaches several subjects, at the same time as these enrich her development and knowledge every day.

>At the Order of Ayala centers in Madrid, she initiates her students in magic, divination arts and Tibetan Reiki Usui, devoting the rest of her time to help people that need her aid. She also travels abroad every three or so months to work on projects that require her presence.

In 2009, publishing house “AE” published her book Rituals, a Path to Initiation, one of the most complete esoteric manuals so far and recognized as one of the best in the matter, also being the first one to be published by a Spanish author. The book was introduced at Madrid’s Gothic Week, events that she usually attends and partakes in. The manual stands out for the experience and knowledge you can acquire from it, and for the great help it brings to people that want to be introduced in magic for the first time, as well as those who have already been initiated.

Throughout her career she has been recognized with several honors and awards.

In December 22nd 2010, after announcing for several months that she was doing rituals to attract positive energies and bring the jackpot of the Christmas National Lottery to number 8 in Alcorcón (La Mexicana), she succeeded, being the first time this has ever been done in history. She was on the cover of El Mundo newspaper on December 23rd. Not only most Spanish media mentioned this feat, but it also had international coverage. She repeated the same deed on December 22nd, 2011, giving the fifth prize, and January 7th, 2012 bringing jackpot again at Spanish Three Wise Men lottery game.

It is worth noting that in October 2011, El Mundo newspaper dedicated a full page to her considering her the most important medium, sorceress, seer and tarot reader of her time, giving services to very important people such as politicians, famous artists and members of the high society, but mostly emphasizing the social work she gives by helping both individuals and institutions. Also TV show Gente from TVE1 and Madrid Directo on Telemadrid mentioned this piece of news.

Right now she is a common guest in several programs on Telecinco, TVE1 and Telemadrid, such as AR, Sálvame, Territorio Comanche, Más Gente and Madrid Directo, etc.

She is also the director of the Museo de la Baraja, del Tarot y Esoterismo (Spanish Cards, Tarot and Esoterism Museum), dedicated to research and collection of all types of decks, as well as objects, documents, books and curiosities in the esoteric world and the field of alternative health. She is the president of ASES, too (Spanish acronym for Esoteric Association of Occult Spiritual Sciences and Alternative Therapies in Spain).

In October 2012, she published her book Oleos de silencio (Canvas of Silence), which she co-wrote with the famous astrologer Andres Santos. In this essay about Tarot, they transcend the theory and express their passion, talking about their lifestyle and adding meanings that had never been studied before.

Nowadays she frequently travels to Mexico where she is learning everything related to the Aztec and Mayan cultures, focusing on the most ancient and deep magic, as well as giving numerous successful conferences.

In Spain she is still investigating and studying everything related to Astrology with Andrés Santos. She is currently introducing new knowledge on Wicca magic, getting some of that knowledge from the witches of Iris.

She is also a direct advisor to several manufacturing brands of esoteric products where she can implement her knowledge of traditional recipes, alchemy, etc.

In January 2016 she got her certification as a Tibetan Reiki Usui Master and she now belongs to the Reiki Spanish Federation. She is currently writing some Reiki manuals soon to be published.

Her most important project so far is the ESOTERIC AND ALTERNATIVE THERAPIES SCHOOL, which will open its doors in the famous street Ortega y Gasset in Madrid, where professionals from all over the world will be able to teach both in person and virtually.

This website uses cookies to improve your experience while you navigate through the website. Out of these, the cookies that are categorized as necessary are stored on your browser as they are essential for the working of basic functionalities of the website. We also use third-party cookies that help us analyze and understand how you use this website. These cookies will be stored in your browser only with your consent. You also have the option to opt-out of these cookies. But opting out of some of these cookies may affect your browsing experience.
Necessary Always Enabled
Necessary cookies are absolutely essential for the website to function properly. This category only includes cookies that ensures basic functionalities and security features of the website. These cookies do not store any personal information.
Non-necessary
Any cookies that may not be particularly necessary for the website to function and is used specifically to collect user personal data via analytics, ads, other embedded contents are termed as non-necessary cookies. It is mandatory to procure user consent prior to running these cookies on your website.
SAVE & ACCEPT